She’s the perfect martyr because she’s a fantasy, her own wild fantasy.

A long, endless nightmare of torture and crucifixion.

Red Feline On The Cross, the film that started it all in 1998.

Was it Madonna who said the cross is sexy because there’s a naked man hanging from it?

The subject is, of course, taboo.

For some a man on the cross is sexy … but for some others, a woman on a cross, totally naked, wringing in pain, her body stretched by gravity, full of whip marks … it is the ultimate sexy sight. 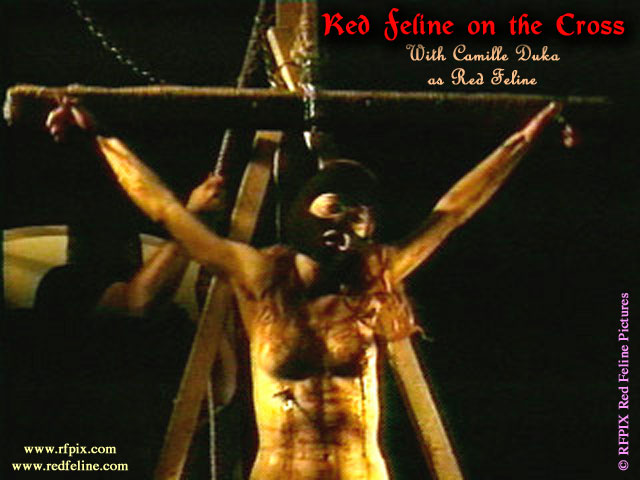 In many of our films and videos we explore a large variety of forms of torture leading to crucifixion.

By exploration we mean to actually recreate the torture as well as we can, film it as a performance work. A passion play.

For our first movie a character was created, Red Feline, the creation of Camille and Jan Jac.

Red Feline goes through many deliciously nasty tortures, even crucifixion, in painful
detail.

The Challenge for Camille and JJ was to make it as powerfully convincing as possible.

The Goal: To create that which has eluded JJ for all of his life.

But there’s another goal, a more implicit one. To train Camille for the role of her life. She’s to play a very controversial role in a production that will make Story of O obsolete.
With all that in mind, JJ and Camille set out to shoot the video.

As fantasies go, this one is a bit too much, it deals with the darkest thoughts … you can’t believe you actually think this way … and of course you don’t really think it’s anything you’ll ever, ever see in your life …
A beautiful, young, courageous woman nailed up to a cross. But now it is a MOVIE!

A very naughty film
Strictly for adults
The young, beautiful and courageous French actress is over 18 years old
60 deliciously painful minutes.
© 1998 Red Feline Pictures
All world rights are totally ours and ours alone.