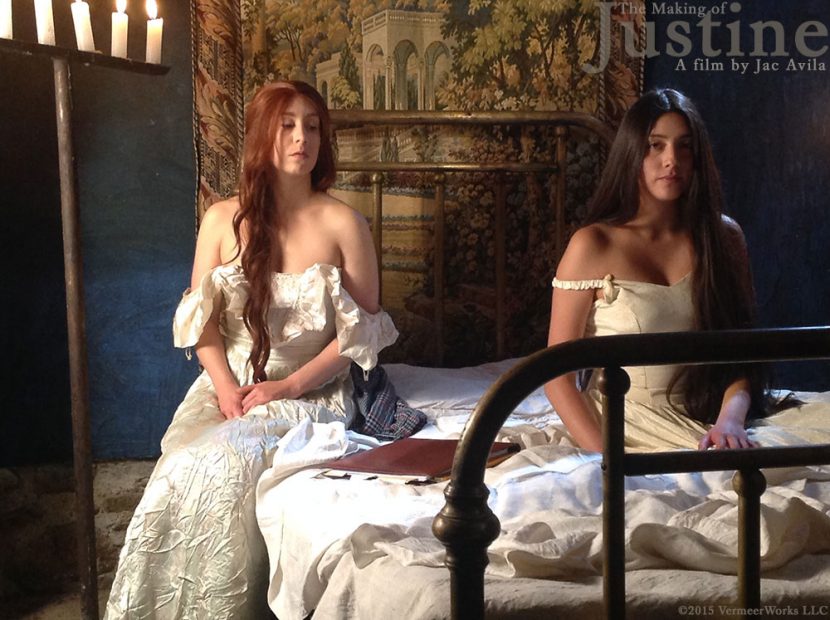 Justine, Part One: The Novel

Jac Avila’s adaptation of the Marquis de Sade’s novel, Justine, is now available from Pacahamama/Decadent Films. Before taking a critical look at the movie, it’s helpful to have an understanding Sade’s work.

All references to the original story, Justine or the Misfortunes of Virtue, posted here come from the Oxford University Press paperback edition published in 2012. The translator is John Phillips.

During his time in the Bastille, the prolific author and playwright penned Justine. Published in 1791 after the French Revolution, the novel is an early example of pornography, eighteenth century style.

Sade’s story is a satirical work.

The marquis rails against the Church and society and marvels at the libertine (free thinking) way of life.

He uses Justine, a pathetic girl who tries to preserve her virtue in the face of overwhelming vice, as the punching bag to justify his philosophy.

The Story in Brief

At age twelve Justine and her older sister Juliette fall upon hard times. Though born of nobility, they are orphaned and penniless and forced to go their separate ways after leaving the protection of a convent. Fifteen years later, they meet again when Juliette is thirty and Justine well into her twenties.

Juliette lives a pleasurable life of vice, Justine a miserable one of virtue. Despite her desperate pleas to Heaven to protect her, Justine suffers a series of tribulations that include graphically described tortures and repeated sodomy.

Her tormenters come from all corners of society: criminal gangs, aristocrats, and churchmen among them.

Imprisoned by disreputable characters who abuse her incessantly, Justine is accused of various crimes, branded a whore, and is in the hands of the authorities when Juliette, known now as Madame de Lorsange, rescues her.

The novel is a flashback in which Justine recounts her miseries. Virtue is rewarded only briefly, however, as the poor lass is struck dead by a lightning bolt.

Justine, Part One: The Novel